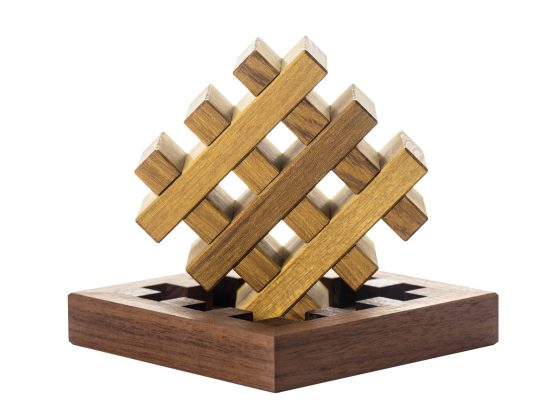 “Finally today, a new design from a man we have not heard much from in a long time… Dan Fast has designed a few puzzles over the years (both Twisty and interlocking/burr) which I have had the opportunity to review and enjoy a few times on the blog. Dan got into Burrtools a few years ago and has recently been playing with it again. He sent me a few BT files a month or so back to ask my opinion and I was fairly positive about them. Jakub also got to see them and was enthusiastic enough to make a quick prototype (really really quick!) and made the decision to produce one of the easier of the designs. Web 3 is the result. This has been gorgeously made from Garapa and Ovangkol (stunning grain on it). Dan has designed a whole bunch of these up to 8×8 but I think Jakub wanted something more approachable for all puzzlers.

The aim here is to slot the pieces into the frame to create a lattice that sits flush with the base. My first attempt at this had it solved in about 5 minutes and I was left with a feeling that I was missing something. I took it apart and gave it to a coworker and they really struggled – I must have got lucky. They eventually put it together and were very pleased with themselves so I tried again. My second attempt was less straight-forward. It requires a little trial and error but mostly, after the first few attempts, a definite plan and logical approach. It is still not hugely difficult (I think that a 4×4 version might be really really tough – too tough for me) and the final assembly gives a nice satisfying feeling. This is definitely suitable for beginners and experienced puzzlers alike.”