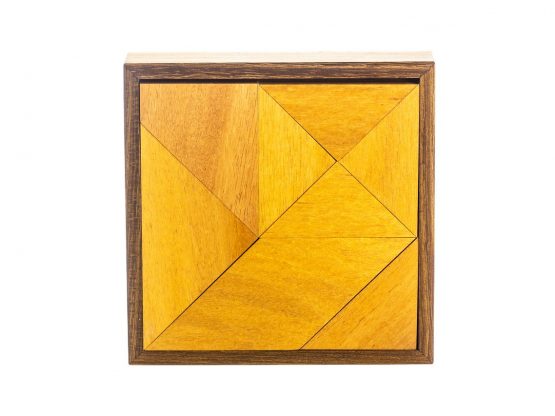 “When I received this batch from Jakub, I was rather surprised at the name of this puzzle. It doesn't look much like an Indian meal. Dr Latussek, a master of the unusual packing puzzle (I have still not managed to solve Fermat or the Euklid for Nick puzzles!) has informed me that this puzzle has been designed and named for Paul Curry, magician and apparent inventor of the missing square puzzle. The Garapa pieces fit into the square Acacia compartment rather like a tangram (it's not quite the same shapes as a tangram). The aim is to tip them out and fit them in the frame on the other side. This is extremely difficult due to the overhanging lip. I failed initially and decided to put the pieces back in the top frame for storage…this proved tougher than expected. There is definitely something odd going on with the dimensions of the pieces as they were rather harder to put back into the unrestricted tray than they should be and some orientations just won't work. Have a really good look at the pieces before trying to solve it and then it will become a much nicer challenge. I didn't properly look until I'd spent a couple of hours failing! I think I got lucky with this one – I suspect that it is really quite difficult but will still be a really fun challenge.”