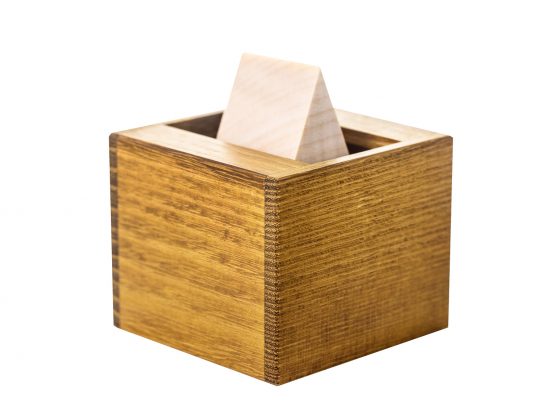 “I have been thinking and working on FERMAT for more than two years. I had initially planned a puzzle with a box typical for me: a square base and centred opening and three triangles. Preferably equilateral triangles. Despite considerable effort, I could not find discover an exciting solution. So I switched to isosceles triangles, in the end the 45 degree angle imposed itself. The side lengths of the three triangles now had to be chosen in such a way that the solution path I intended could not be shortened and, above all, that there were no other solutions. That sounds simple. But in fact I have never struggled so much to make all the possibilities of three triangles disappear into a cuboid box and only allow exactly the one required solution. Triangles are nasty. If you turn the triangles you will see and feel what I mean. Even though FERMAT's triangles have a nice symmetry as isosceles triangles. Do not be fooled. I recommend first getting to know the properties of the triangles outside the box. First practise with the triangles individually in the box. Spaces disappear, spaces open up again through simple rotations. All in all, I was sure twice that I had found the right set of three triangles, only to learn from friends that I hadn't thought of everything. Today I am sure that FERMAT works. But maybe you also want to become friends.”

“Using the usual box that we are by now all rather familiar with, Dr Latussek has branched out into the use of not rectilinear shapes. Named after the great French mathematician, this puzzle takes 3 triangular prisms of slightly different dimensions made from Maple and asks that they be “solved” into the beautiful Acacia box. I have been playing with this on and off since they all arrived and have gotten absolutely nowhere! I can get 2 pieces inside and this can be any combination of the pieces but I have not even come close to getting the third in with them. I think that just possibly, maybe, if I am not delusional that I might have worked out where they all need to go for the final solution but there is just no way that I can achieve it. I hope that maybe someone can send me a clue once others have managed to solve it.”