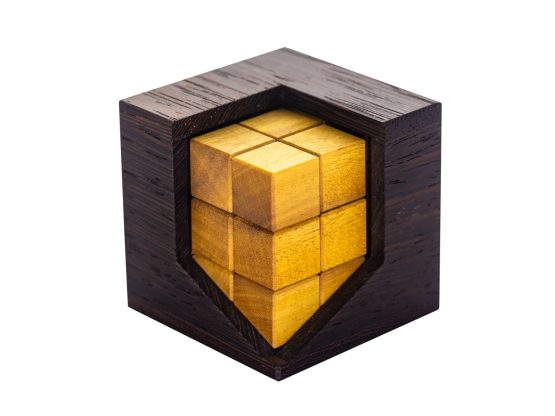 “This stunning creation made from Wenge and Yellowheart also comes from the warped mind of Osanori-san. I am not sure why it has that name but it may be because the pieces dance around each other during the solution. I initially thought that the enormous entry hole through which the 3 rather complex pieces need to be inserted would make for a significantly easier challenge and, oh boy, was I wrong about that. Whilst it initially appears like there is a 2x2x2 sized hole for entry, it actually is even larger than that due to the fact that the bottom corner slopes gently down indicating that this puzzle is based on a much bigger grid. Obviously once solved the hole should be completely filled and that in itself is a huge problem. That sloping edge also makes movement of the pieces much more difficult. I managed to place the pieces inside the box in several different ways pretty easily but I really struggled to find a way to leave the entryway fully filled and so I tried to think outside the box. After 4 days I had only found 2 ways to assemble a 3x3x3 cube which would fill the hole completely and none of them could be placed inside the box. I was forced to resort to Burrtools to find other possible assemblies – there were another 2. Even knowing the possible other cube assemblies still left this one as a huge challenge. Each finished cube could be rotated through 120º giving 6 more assemblies to try. Finally after several more days I managed to find the solution with a sigh of relief. If anyone says that only 3 pieces makes for an easy puzzle then laugh at them – with a disassembly level of 10.1.3 this is a massive challenge. Very enjoyable and a must buy for any Osanori fans.”

Be the first to review “Samba” Cancel reply