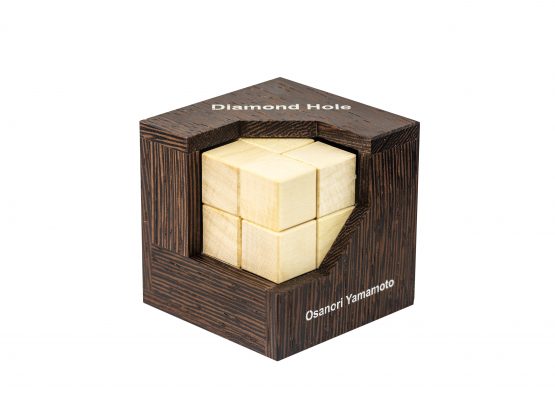 “Osanori Yamamoto keeps producing designs based on a small cube or cuboid cavity (literally just a 3x3x3 or 3x3x2) within a simple box which has one or more holes at some position and the aim is to insert a small number (usually just 3 or 4) of oddly shaped pieces into the cavity such that the hole(s) are completely obscured – this may completely fill the cavity but often does not. The premise of these puzzles is incredibly simple but the sheer challenge and enjoyment that is achieved with such a simple idea cannot be underestimated. Sometimes rotations are required but mostly it is just a dance of the pieces in a beautiful pattern that is required before they settle into place. Looking at the pieces of Diamond hole you can see that there is going to be a reasonable amount of space left inside the box but the complexity of the pieces coupled with the restriction to movement caused by the diagonal half filled voxels along the edges of the holes make for a really fun challenge. Having finally found a number of cubes that fill the holes, it was time to assemble it inside the box. I got fixated on one particularly nice cubic assembly and tried it for hours and hours. Sigh! Maybe my cube was wrong? Hell yes! I found another cubic assembly that didn't seem quite as nice but did fit the shape and after trying several different orientations, I thought I had something promising. Time to try getting it into the actual box. Even that is a huge challenge! Which piece to try in which order? I was fixated and kept trying the same idea over and over again and, of course, failing. Aaaargh! In my virus enfeebled state, I kept trying the same thing and for once, I have disproved the theory – something changed and I had the puzzle solved! Yessss – I loved it!”