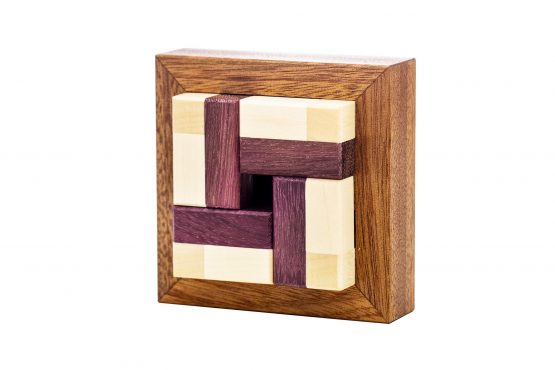 “This gorgeous creation has been made using Mahogany, Maple and Purpleheart giving a really lovely looking cross design. In the last batch of Pelikan puzzles there was a release from Osanori-san which also involved 4 twisted burr sticks fitted into a frame. This particular variant has a very shallow frame and very simple obstructions protruding into the cavity. The sticks are as simple as they can possibly be which means there is a lot of possible movement right from the outset. The first couple of attempts, I got a little lost and had to backtrack each time but eventually I found a rather promising sequence that almost released the first piece. Getting it actually to come out proved a little elusive until I had a quick look on both sides and realised what could move. After that I had my four sticks and frame and realised just how simple the shapes had been. Having taken my photos and rearranged the pieces from their removal orientations, I found the reassembly a fair challenge. If this was given to a puzzler having been already taken apart then it might prove really quite a challenge – it would certainly be completely beyond me but many of the better interlocking puzzlers would find this a great challenge. Well worth adding to your Osanori collection.”

Be the first to review “Zeus” Cancel reply