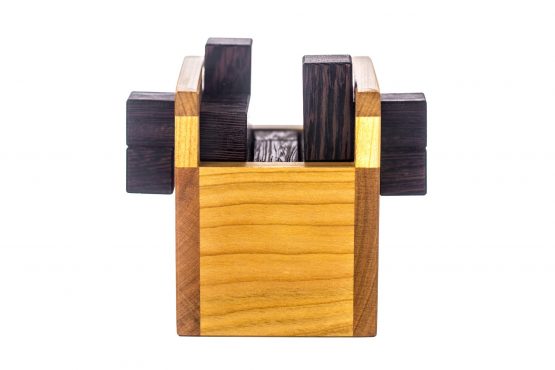 “Alexander has taken the puzzle world by storm over the last few years. He has designed some of the most complex and yet still fun interlocking packing puzzles I have ever seen and I just cannot resist his stuff. Luckily for us puzzlers, Jakub also agrees that his designs need to be made available to the world. The fun thing (just like Osanori-san) is the ability to create something that looks simple, with only a few pieces which aren’t even that complex but requiring real thought and experimentation to solve. Sliders 2 is simply amazing but it comes with a warning…it might frighten you too. When it arrived, the 4 pieces were placed in the 3x3x3 box in such a way that I seriously struggled to remove them – this was a hint of things to come. After 5 minutes of swearing and upsetting Mrs S, I got my pieces for the photo and realised that this was a lot different to the previous Sliders challenge (and, I think, better for it). The 2 sliders are identical which means that the puzzle can be solved in any orientation and interestingly they are held in place without intruding into the puzzle space – they purely block the entrance and oh boy, they really block it! The aim is to create a 3x3x3 cube from the 4 pieces and place them such that they completely fill the entrance (there will be empty cubies below that top face). Having solved it (with a considerable struggle), I went to Burrtools and found that there are 21 possible ways to make a 3x3x3 cube but only 9 assemblies that have a complete face. This is going to take you quite a bit of thought and I would not be surprised if you need a little hint (I did). Alexander contacted me before I started to play and told me something important. Thank heavens for the hint – it stopped me from using quite a few of the 3x3x3 assemblies that I had found. Now, I wonder whether any of you remember the warning? This puzzle frightened me at one point during the solve process. I thought that I had worked out what to do and was fiddling around with 3 pieces inside and adding a fourth when suddenly I could make several moves but not the one I wanted to. OMG! Time to backtrack and think©…except I could not backtrack. Things had moved inside and I could not work out where they were. I spent a furious ½ hour effing and blinding before realising that one of the pieces inside had partially rotated and was blocking the critical move. had I killed my puzzle before solving it? Thankfully no – once I had realised the issue I was able to rotate it and correct the issue. This then told me there was an added puzzling element – the puzzle needs to be manipulated just right to let the pieces slide but not rotate in the wrong direction. It took me quite a few hours to solve and is probably my favourite of this release – it is super difficult, super fun and frightening too. I would very much suggest that you don’t leave this in the solved position for storage because once you have forgotten the solution the chances of dismantling it blind without using a Burrtools file is pretty low. Well done Alexander and Pelikan for a fabulous creation!”

Be the first to review “Sliders 2” Cancel reply