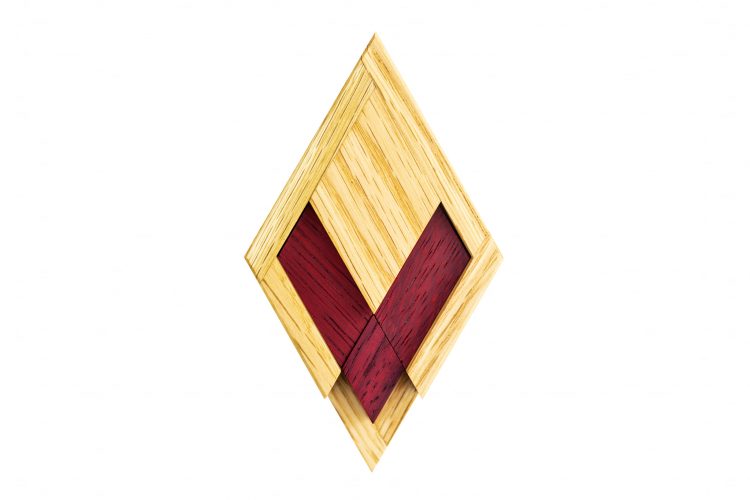 “Yet again, we have another puzzle based on a non-rectilinear grid – only Pelikan seem to have the courage to do these sorts of puzzles. Taking the pieces out of the box as it had been packed for transport, I could see just how accurately these had been made – the pieces had sharp corners and I had to be careful not to stab myself. I am sure that you can see it straight away but for me it took a few days for me to realise that this one is also ‘just’ a 3x3x3 cube to be fitted into a box with a complex entry hole. The special feature is that this box and the pieces have been sheared along the x-axis to make a shape that is also quite difficult to visualise in your head (of course, YOUR head is probably more capable than mine). I worked on this in my usual fashion – assemble the correct shape outside the box and then work out whether and then how it can be placed inside. I am not good with a non-rectilinear grid and just finding the shape took me a little while. There are some big clues as to what is needed in looking at the shapes. The restricted entry is very helpful in limiting the possible assemblies and I was pretty sure that I had the correct one settled on fairly early. Time to work through the disassembly first outside the box and the skewed shape made it hard for me. After about ½ an hour I had it worked out – solved in about an hour? Not so fast! Actually doing the assembly proved an extra fun challenge – gravity has to be utilised just right and a good bit of dexterity. The staff at work had watched me working on it with fascination and were almost as delighted as I was when I stood up and showed them the final result.”

Be the first to review “Play-boy 2” Cancel reply