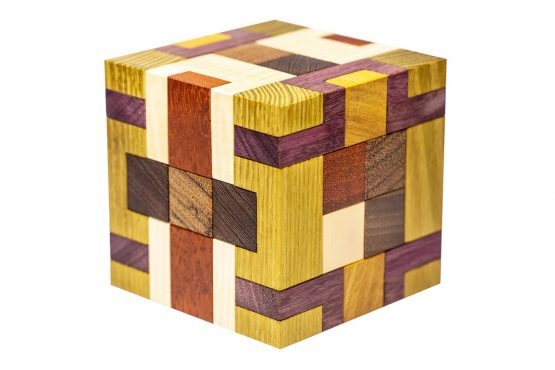 “Alfons Eyckmans is one of the best designers (and craftsmen) of burrs and interlocking puzzles in the world! Over the years, I have collected many many puzzles from him (I daren’t admit how many to Mrs S) and absolutely love them. Over the last few years he has been designing beautiful cubes made from interlocking burr pieces as opposed to classical burrs. Some of them I have even managed to solve! The process always involves a wonderful period of exploration and fun – I adore these puzzles! They are fun to play with and look incredible on the display shelves. Many of these beautiful cubes have been named for or by well known members of the puzzle community. Michel has named a few after his family, I have named some after my Burmese cats and one of the best of them was named for Pelikan’s own Jakub. Alfons made me a copy early last year and I’ve never managed to solve it despite several weeks of attempts (I must be missing a hidden move). Alfons never expected it to be produced in any significant numbers because the pieces are incredibly difficult puzzle to make – he was absolutely delighted to see Pelikan create their absolutely stunning version. To be perfectly honest I don’t think I’ve ever seen anything so beautiful from anyone! I have not had time to play with this one yet (apart from the several weeks spent on the original) but have found all the moves available to me to be extremely smooth. There will only be 35 of these made and it is extremely unlikely it will ever be produced again. Get this whilst you can even if it is just for display purposes!”

Be the first to review “Jakub’s Cube” Cancel reply