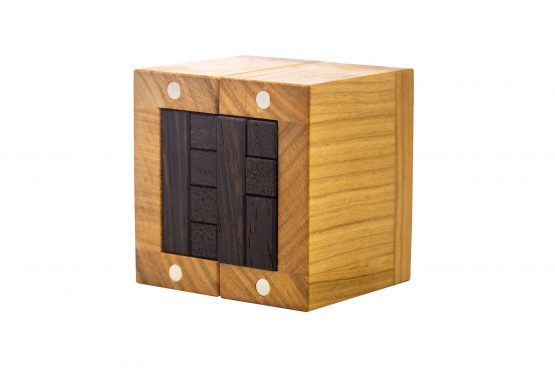 “I was rather curious when I took this from the packaging. The beautiful Wenge cube inside the Cherry wood box looked odd – there were magnets and I wasn’t certain what they were for. So I dropped the cube out the centre and it fell apart into 9 horrifyingly awkward components and a box that was “broken”. I wasn’t certain what the point was apart from maybe put the pieces back in and maybe rearrange the box halves into an alternative shape around the cube. I initially decided “just” to put it back together again as I had received it. I wrote “just” because this was a horrifically tough task for an assembly puzzle dunce and it took me a couple of hours! I then thought I might try to make the flattened tray version and so far have completely failed! How can creating such a simple shape be so damned difficult? Jakub later sent me the instructions and showed that there were quite a few more challenges with the box being held together by the magnets in another 5 shapes giving 6 really tough challenges in one. These puzzles can be solved in 2 ways – you either make the shape first and then add the box frames to it or assemble the box and try to put the pieces inside afterwards. Burrtools tells me that there are hundreds of assemblies for some of the shapes but I have absolutely no skill in finding them! Lord knows how long this will take me! This will be tremendous value for money to any puzzler who purchases it as well as a really fantastic series of challenges.”

Be the first to review “Broken Box” Cancel reply