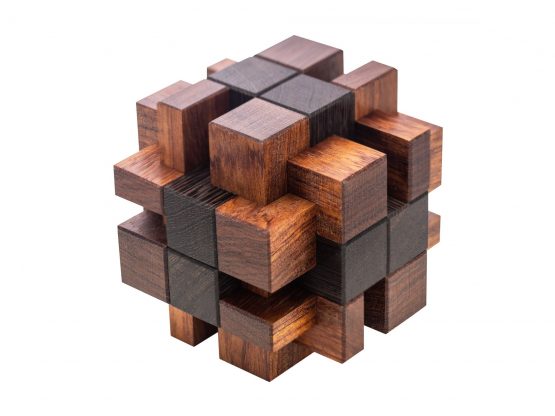 “This gorgeous construction is another magnificent burr design from Alfons Eyckmans. This one made from Bubinga and Wenge looks ferociously difficult. Anything with this number of pieces frightens me but I still cannot resist them. My fear is always getting badly lost in the disassembly and then being unable to return to the beginning or make progress. This puzzle is complex but not so complex as to worry anyone about being unable to make progress. The reason that Pelikan decided to make this is because it is effectively a 6 piece burr (albeit with stick length of 8 voxels) held within a frame made from relatively simple burrsticks. I absolutely loved the initial exploration of the movements as there were not too many available and certainly no chance of me getting stuck. The first piece takes 25 reasonably logical moves to release and thereafter the rest of the solution progressed very enjoyably. The puzzle remained remarkably stable (if a little squishy) even after 6 pieces had been removed and I eventually managed to remove the entire frame (which consists of 6 identical versions of two types of piece) and was left with the 5 piece burr intact and remaining to be dismantled. The reassembly will definitely require Burrtools but that is half of the fun.”