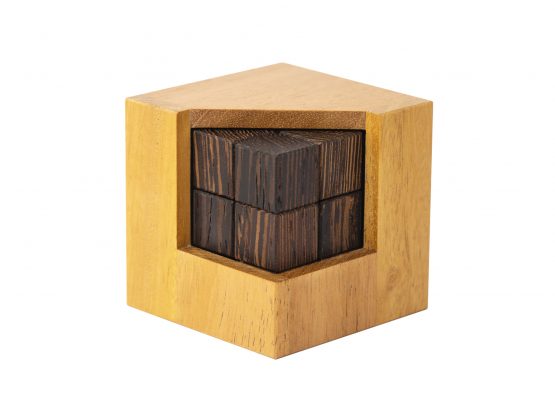 “I had seen on Facebook that Osanori Yamomoto had added a version 2 to the Pumpkin 1 puzzle and wasn't disappointed when Jakub said they were producing it and it arrived in the current batch. I couldn't resist trying it straight away. The box to be packed has a similar opening at the front but the presence of a unit hole diagonally opposite tells me there's going to have to be a fair bit of dancing around. Again, this puzzle has only 3 pieces which, for me, adds to the attraction. The entry is limited by the diagonal roof making things potentially tougher… but another effect of this is that it could also allow for a cavity to be hidden underneath – my initial exploration found quite a few possible assemblies into a 3x3x3 cube shape with a few of them excluded straight away by the fact that they required an impossible orientation of the pieces (it cannot be inserted through the hole that way around). I got sidetracked by a nice assembly that would require a rotation of one piece but couldn't make it work and went back to the drawing board. In the end the solution to this one is a nice combination of logic and thought along with some random experimentation. I find it best to start in the solved position and try to hypothetically work my way out of the cage rather than the other way around. This puzzle is extremely logical once you visualise the constraints that Osanori has set.”