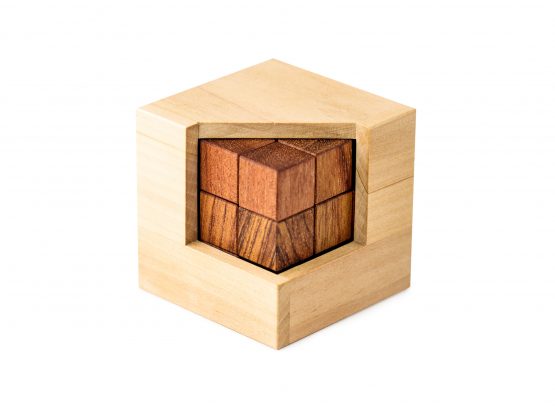 “Pumpkin 1 consists of 3 pieces to be fitted inside a box. They look so simple and yet are such a great challenge. Initially, I did not expect that this would be too much trouble – the pieces are fairly complex and I was sure that forming a cube shape would be fairly restricted. Oh boy, I was very wrong! Much to the annoyance of Mrs S, I spent almost a whole day of my leave playing with this and swearing under my breath. There are actually quite a few ways that the shape can be formed and the presence of the single diagonal edge to the hole made life harder. It limited the entry of the pieces (most would consider this a helpful thing) but it also completely hid a voxel and opened up a huge number of possible assemblies. I spent a whole day failing to find the correct and eventually after several hours found an alternative assembly of the cubes that I had not tried before. The final assembly sequence is a beautiful dance with the pieces moving around each other. Wow! That was a huge struggle! That was a very tough puzzle!”