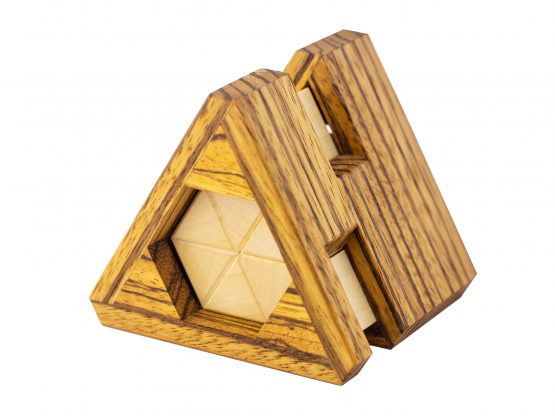 “This beautiful puzzle is a design by Alexander Magyarics. It is beautiful in Zebrano and Padauk and most importantly it's based on a triangular grid. Very few puzzle designs (other than 2D packing puzzles) are very made using a triangular grid. I suspect that this is primarily because it is harder to design them with it being very hard to tell during the design process whether there will be unwanted rotational shortcuts. Also there are very few craftsmen willing to put in the time and effort to make the required jigs to these accurately. Here we have the perfect combination of a talented designer who has obviously done his homework and ensured there are no shortcuts as well as some of the best craftsmen in the world! This puzzle is named after the pepper shaker/castor because of the pattern of holes on one end and it quickly becomes apparent that they are there for a reason. My first reaction during my early moves was that this was seriously fiddly. Then I realised that changing the orientation of the puzzle made certain moves easier to control and then I discovered that after 3 or 4 moves, my ability to backtrack was gone! I was stuck with a piece packing out and unable to visualise the internals to reset it. Oh well! Better carry on then. After about a ½ hour of progressively more anxious swearing, I removed the first piece and then the other two. There was no Aha! moment as I had no idea how I had achieved it. I took my photo and realised that I had scrambled the pieces! At this point, it became quite apparent that this puzzle is a very special variant on the usual Magyarics theme… he had created a fancy low piece number interlocking packing puzzle. Very similar to many of his others but with the twist of a triangular grid and holes top and bottom. Repacking was a serious challenge, first reproducing the shape to fill all the gaps in the box and then working out the sequence. Finally actually having the dexterity to do it was a nice added bonus. This is a terrific puzzle as well as a gorgeous one!”