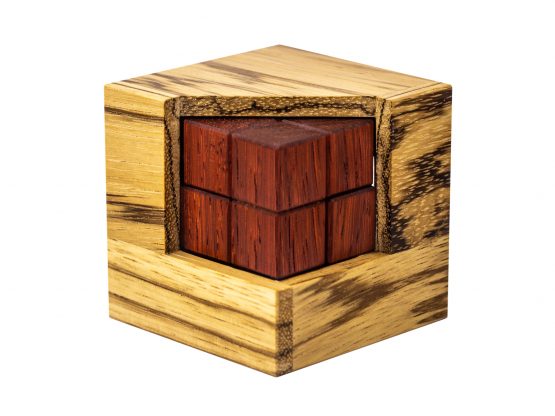 “This simply stunning puzzle from the fevered brain of Osanori-san is made with a Zebrano box and some very vibrant Padauk pieces. Here there are only three pieces to be fitted inside but they are fairly complex and there are 2 rather large holes diagonally opposite each other to be filled at the same time. That single diagonal wall on the entrance will prove very important. Initially I could find several ways to make the 3x3x3 cube but I couldn't for the life of me find an assembly that would end up with the opposite corners filled. It took me a couple of hours to find a potential assembly only to be stymied by the realisation that one of the pieces was oriented in such a way that it could not be inserted inside the box at all. Back to the drawing board. After a further few hours I realised thatI had missed an alternative cube assembly – this was easily done because the positioning of the pieces was particularly unintuitive. Having found a new shape, I had to find out whether there was a sequence that could fit it into the cube frame. Again, I struggled but just in the “nick of time” for my review – this is a wonderful challenge with a fantastic Aha! moment.”