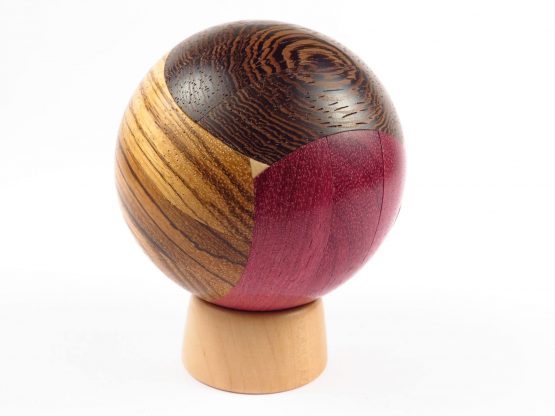 Diameter of the ball is 90 mm.

“This beautifully made ball was actually designed by Jakub Dvořák in 2008. Having spent many years working for and later as co-owner of Pelikan puzzles he had seen the structure of an huge number of different puzzles and this can't have failed to give him ideas of his own. This is his first design heavily influenced by similar ideas from Leonid Mochalov. The O.S.M. Ball is lovely object made from 8 different and contrasting hardwoods. The disassembly is not particularly difficult but reveals a nice clever locking mechanism which releases the first pieces in a movement that surprised me with its’ elegance. After disassembling the serially interlocking pieces revealing the masterful joinery, I scrambled the unusually shaped pieces and left them a while. The
assembly is the real challenge – again, it is not hugely difficult but is a very enjoyable and repeatable process. It makes a wonderful addition to my collection of puzzles from Pelikan that have also been turned to curved perfection.”