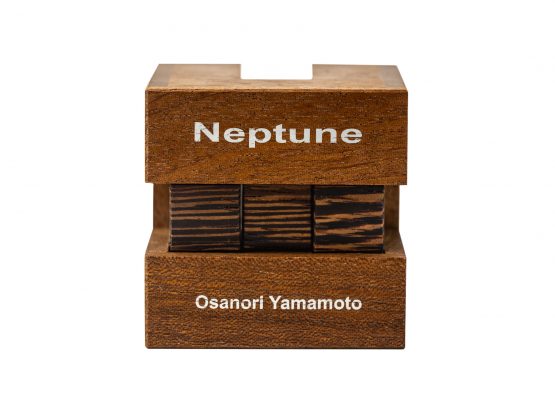 “This puzzle really worried me when I took it out of the packaging! The box contains a 3x3x3 cavity but a very restrictive pair of slot entry/exit holes which looked like they would make it really tough to get the pieces oriented correctly and there were 6 pieces to be packed! I am terrible at packing puzzles and as soon as there are more than 3 pieces then I struggle a lot. It is completely different to the other puzzles from Osanori-san, the pieces are very simple (3 pentominos and 3 tetrominos) and the total voxel count is 27 meaning no gaps. My first several hours left me unable to even make a 3x3x3 cube from the 6 simple pieces. This worried me because I could tell that the solution would have to include at least one rotation (look at the shapes and the slots and it is pretty obvious). Eventually I found a cube assembly and then realised that I would have to try 6 different orientations before ruling it out as the correct assembly. After rotating it 6 times, it very quickly became apparent that it was impossible to assemble it inside the box. There is one very important constraint that is immediately obvious as soon as you actually try an assembly. There are 8 possible ways to make a cube and each one needs to be looked at in 6 orientations – 48 possible combinations. Out of the blue, I found another assembly. I could actually tell that it was different because it met a particular constraint that I had set which should make entry through the slots possible. Unlike Diamond hole, this does not take a lot of careful planning for the actual assembly as there is no real dance of the pieces around each other. There is a certain fairly obvious order and the rotation(s) are important but not difficult and then suddenly you have an assembled cube inside the box! The Aha! moment is delicious – it is a more “normal” packing puzzle than most of his designs but the restrictive entry and the rotations make it much more interesting than a standard packing puzzle. It also has a fair bit of repeatability – I have been unable to solve it a second time despite trying for a couple more hours.”