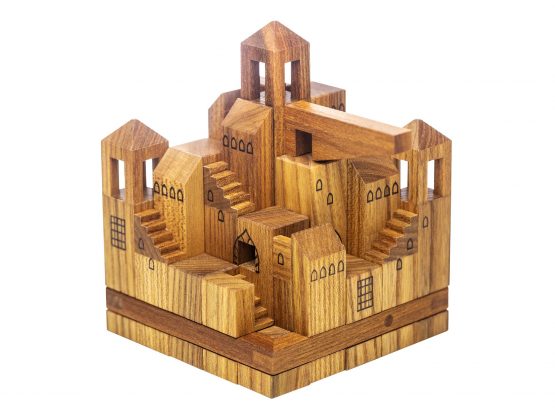 “This incredibly striking puzzle is yet another fabulous creation by Tamás Vanyó. It has been made with Elm to match the pale city that was shown in Peter Jackson’s amazing Lord of the Rings films. Like the Caste builder set in the previous release, the Minas Tirith is constructed using 2x2xN sized pieces that fit in a frame which has restrictions in it. Unlike the castle builder set, the frame actually forms part of the outer wall of the puzzle and greatly restricts the ability to insert the pieces and means that the order of insertion is crucial. I have to state that I have not had time to solve this puzzle. The aim is to create a “city” so that none of the inner rooms are visible externally and also there is an extra challenge which Pelikan have added. Once the puzzle has been dismantled you will see a bunch of interior channels cut within many of the pieces. The aim is to assemble your city so that the supplied metal ball bearing can be inserted into the hole near the top and then can navigate the carefully assembled maze so that it can exit the exterior door after tilting it back and forth in the correct direction. This will be a huge challenge for any puzzler and will leave you with a stunning puzzle to put on display afterwards.”