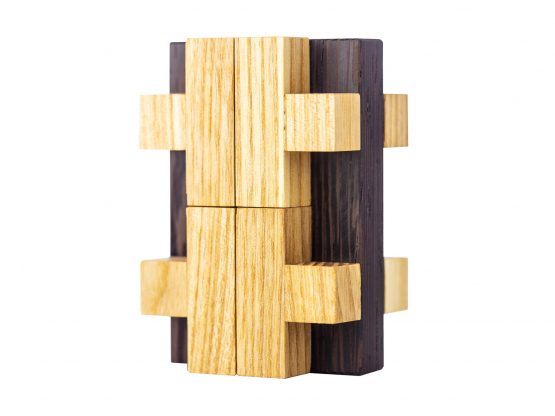 “This lovely puzzle designed by Osanori Yamamoto looked very familiar to me but I could not recall where from. After taking my photo and having a fiddle, I realised that I already had a copy of this from way back in 2015. This version by Pelikan is made from Wenge and Ash with a very striking grain enhancing the beauty. At that time, I had managed to disassemble the puzzle within a few minutes and found the reassembly the real challenge. Back then I must have been much better at puzzling because this time taking it apart took me about 30 minutes. Like many of Osanori-san’s delightful frame-based creations, there are multiple rotations required to remove the pieces and with this one there are a huge number of rotational moves possible in multiple positions. On a couple of occasions, I had rotated several of the pieces but found myself unable to move further but also could not remember how to return to the beginning. There are no fancy hidden rounded edges here that allow special moves – it is a matter of making the right amount of space to facilitate a rotation before then moving on to the next piece and eventually orienting one of the pieces into the position where it lines up with a T shaped gap and can slide out. After that, the removal of the rest is easy. Just like last time I played with this puzzle, I left the pieces for a few hours before the reassembly was attempted and this was again a significant challenge for me. It took me even longer than the 40 minutes back in 2015 – I am slightly ashamed to admit that it took me nearly an hour! Great puzzle – if two separate craftsman make it then it probably is really good!”