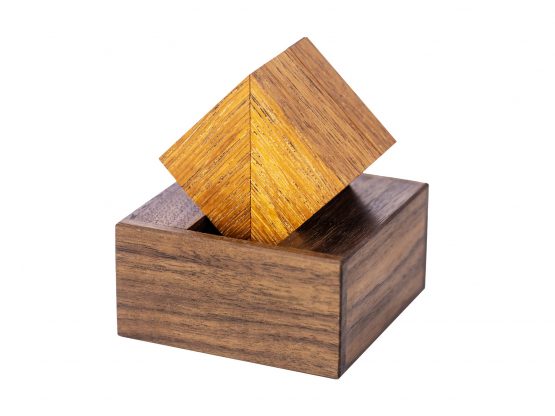 “With FERMAT I wanted to learn how triangular parts interact with one of my typical boxes. When I talked to Eric Fuller about this, I came up with the idea of dividing a cube into six triangular parts and placing this cubic dissection in one of my typical boxes as well: FERMAT MEETS FULLER was born. Pelikan Puzzles had a lot of patience with me, because it took several prototypes to implement a very exciting solution for me. Now I wish you the same feeling.”

“I have to start the review with these simple words: Buy this puzzle! It is incredible! Dr Latussek has a very strange mind! I do not understand how he designs these things – Burrtools is no use for them, he must do this in his head. This is not normal, there is absolutely nothing in my head at all let alone complex geometric manipulations. Volker has created several packing puzzles over the last few years and I have only ever managed to solve a couple of the simpler ones – it is telling that one had “for kids” in the name. So when I received the Fermat for Fuller, a few things raced echoingly through my empty noggin. First was the memory that I had not yet managed to solve the original Fermat (I had reviewed it unsolved here and Allard had reviewed (solved) it here), and secondly I wanted to know why it was for Fuller? Volker told me: ‘With FERMAT I wanted to learn how triangular parts interact with one of my typical boxes. When I talked to Eric Fuller about this, I came up with the idea of dividing a cube into six triangular parts and in placing this cubic dissection I had a long and clarifying conversation with Eric Fuller some time ago. Then I had the idea to dissect a cube (cubic) into triangular parts (Fermat). Fermat meets Fuller was born.’ Pelikan has created this using American Walnut and Merbau (which has stunning grain with amazing looking end-grain faces. The precision required for this puzzle is something to behold – it is simply perfect! Only Jakub and Jaroslav can do this in large numbers! I even struggled to dismantle the delivery position – having taken the two loose pieces out of the box and seen the other four in the base and tried to remove them – I couldn’t take them out – I knew that this was going to be a challenge! Once I had removed them then I had seen the kinds of manipulations that are possible and hoped that would arm me for the solution. I am terrible at this kind of challenge and did not hold out much hope but once I had seen the possible moves and that there was actually quite a bit of room in the box and a relatively large opening, I had a few ideas. Needless to say, my ideas all failed for the first couple of days of trying. The next thing to do was to look at how many ways the base layer could be arranged, and then see how I could place the extras in the top layer – this is the real challenge – placing a base layer is fairly easy but this really blocks any space left for getting later pieces inside. After 3 days of failure I was becoming increasingly desperate and was losing hope. I then had a large Eureka moment (no, I did not leap out of the bath and run around naked – even with Mrs S away). I had found an arrangement that would leave a very nice gap to place the final pieces but then had to see whether I could place the first pieces in that position. I was stuck…until I realised that the relative thicknesses of the thick, medium and thin triangles had all been very specifically chosen. These pieces had been designed to allow one very very special sequence of moves. IT IS STUNNING! Volker has out done himself – this puzzle is a design masterpiece and is an essential purchase for any serious puzzler.”