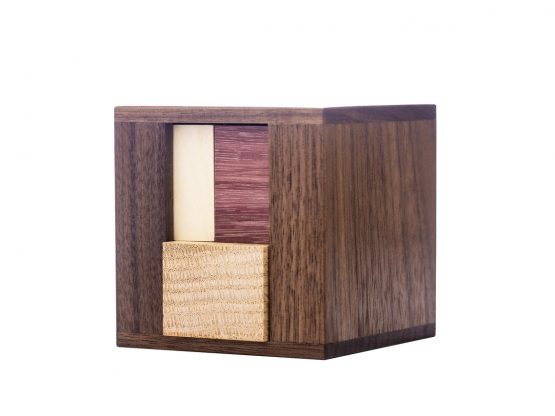 “When I designed EUKLID in 2019, I didn’t realise it would become a trilogy. EUKLID FOR KIDS and EUKLID FOR NICK had not yet been designed, not even envisaged. Shortly after its release we discovered that EUKLID had at least 22 solutions, which was really disappointing as I’d designed EUKLID around a very complex solution path. My surprise and amazement were very great.

After this experience with EUKLID and the universally acknowledged confirmation that EUKLID FOR KIDS and EUKLID FOR NICK each have exactly one solution, another EUKLID had to be found with exactly one solution. The original specifications weren’t abandoned: a 9x9x9 cubic box with a centred 5×9 opening and seven different cuboids with an edge length of between 3 and 6 units. After a long search, I propose the following pieces: 4x4x4, 3x4x6, 3x5x5, 4x4x5, 4x4x6, 4x5x6 and 5x5x5. Following the suggestion from a collector, Pelikan has made each of the pieces in a different type of wood. Many thanks for that. Now I am very curious to see whether the new EUKLID really has only one solution. If it stays that way, then the EUKLID trilogy will finally be complete.”

“Yes, it’s another packing puzzle by Dr Volker Latussek and it’s a brilliant one. Volker emailed me to tell me that it was coming my way and to say “that I won’t like it”. But I have to say that he is most definitely wrong – I always love his designs even if I cannot solve them. The original Euklid (made with all the blocks in one wood type) was a hugely tough puzzle that I only ever managed to solve with a little help. Then along came the second in the series, Euklid for Kids (only 3 blocks to pack) was one that I did actually manage to complete by myself. To Volker’s horror, it was eventually revealed that V1 of Euklid had more than 20 solutions (I only ever found the one with help) and in response he designed the third, Euklid for Nick, (made with 2 types of wood for 2 types of block) which I am rather ashamed still lies unsolved. This was a success for Volker but he couldn’t leave the series with the faulty puzzle and so has has redesigned a Euklid version 2 so that it only has one solution (hopefully). He specified that Pelikan make this from 7 different hardwoods and I have to say that it is simply stunning! I cannot remember the original solution and don’t know whether it has changed. As Volker predicted, I have so far not been able to solve it. I know there will be some lovely rotations and quite possibly some will be coordinate moves. Having taken all the blocks out of the box (with some difficulty) for my photo, I am ever so slightly chagrined that I cannot even return it to the delivery packing position. I hope to solve it one day but it will look great on the shelf until I do. I eagerly wait word from the master (Nick Baxter) of news on the number of solutions. I hope for Volker’s sake that there will only be one!”