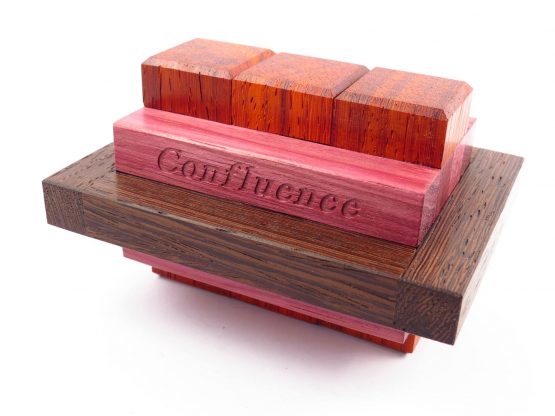 “The Confluence is another puzzle with a ring frame (possible 2 or 3 at first sight) containing burr pieces. The contrasting colours of the Wenge, Purpleheart and Padouk is stunning and the CNC engraving finishes it beautifully. The first moves come as a bit of a surprise and they open up the centre to lots more possible moves and exploration. I initially thought that there would be a simple swapping the burr sticks around and out they would come but it took me quite a while to even find the hole through which they could exit. Having done so, I really struggled to move the sticks towards it because the moves were always blocked. I had a wonderful Aha! moment early on and thought I was well on my way as a stick moved extremely close to the exit point but
Stéphane wouldn't make it so easy. After 2 days I had a breakthrough and my first stick was out – it was not the one I expected either! The rest of the puzzling was incredibly tough and I struggled for ages. Eventually I found one of the most beautifully disguised moves/positions I have ever seen. It should have been in plain sight but is so easy to miss that I had failed for 2 days. I absolutely adore this puzzle – there is just so much to explore and so many unexpected moves. Reassembly is extremely tough but still possible.”