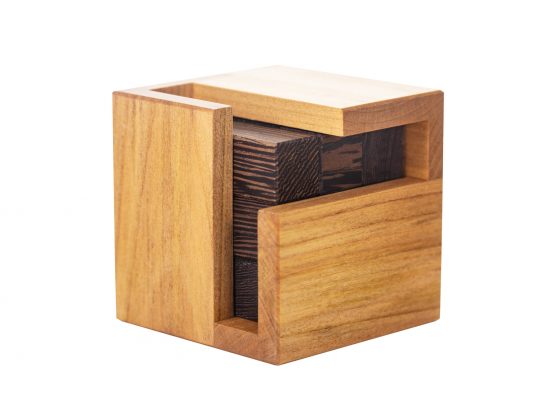 “Let me say from the beginning that for me this was the pick of the bunch – it may not be for everyone but I seriously struggled with this and the Aha! moment, when I managed it, was something truly special. Yet again this is another 3x3x3 cubic packing puzzle with a fancy box and a complex restricted entry which must be completely closed once solved. The title comes from the rather nice 3 armed hole on opposite poles of the box which look like spiral arms of galaxies. Like all of Jakub's work, it is superbly made. The 4 pieces are quite restricted in the way they can be inserted into the box but so much that there is only one choice. Alex is not going to make it too easy by restricting too heavily. Solving this was an unusual experience for me – I did my usual of trying to solve it outside the box and got only so far before having to change my approach. I found a few ways to construct a cube and felt this part was quite fun. Finding which orientations would fill the entry gaps was rewarding too and I had narrowed my assemblies down to only one or two. My next step is to seat the box on my lap (or the sleeping cat on my lap) and alongside it put the assembled shape I thought might be correct and then work through the possible disassembly. The problem for me was that these shapes and the holes in the box were too complex for me to keep visualised and held in place during the process. I tried this each evening for several days and just could not do it. Eventually I abandoned that approach and did something I have almost never managed before – I actually tried to assemble it within the box without having worked out what order or sequence to use first. What a challenge! Which pieces to put in first etc? Eventually I managed to get 3 of the pieces assembled inside but the 4th was a problem. I could do this with several combinations of 3 different pieces, Aaaargh! I spent 3 evenings desperately trying to get this together and always found that the crucial move that I needed was blocked until I noticed something special. Fabulous! I had not tried a particular set of positions before (I don't know why but I just had a mental block and couldn't see it) and suddenly I found the setup position I needed and AHA! It went together like a dream – this is a STUNNING challenge. You may find it easy but for me, I just could not seem to visualise the sequence. It forced me to work in a different way to my usual.”